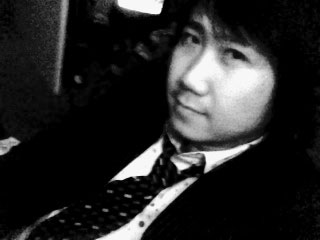 Wayne Hsu is a singer/songwriter, originally from Kaohsiung, Taiwan, and now living in Philadelphia. He describes his music as “smooth, jazzy, mellow, and lougetastic,” pulling influences from “everyone from Burt Bacharach to Phish.”

Wayne was brought into music a little bit later than most artists, when he started playing the drums in his high school jazz band at the age of 15. Only about a year ago did he start performing in public, singing and playing guitar at open mics throughout Philly, and it was these perhaps late-blooming performances that solidified his interest in working as a musician.

When asked what he hopes his fans are able to take from listening to his music, Wayne said “I’m not trying to change the world; I’m just trying to have a sing-a-long.” It’s this light-hearted attitude that you’ll witness when you listen to Wayne’s work. He sets himself apart from other artists by avoiding the angry themes and tone so prevalent in today’s popular music. As he puts it, “There should be something in life that you could be happy about. Therefore I’m trying to bring back the sweet old school innocent sound to pop music or music in general.”

I wanted to know how Wayne come up with his systematically upbeat music. “The music usually comes first. Then I try to find a good melody over the chord progression. Eventually the lyrics would come out after singing the melody over and over. Don’t ask how, but it just works that way for me.”

During performances, Wayne is sometimes backed up by a band (calling themselves the Wayne Hsu Three), and other times he leans more to the solo route, only backed by a percussionist, X-Koamane. In reference to what it’s like working in both atmospheres, Wayne says “when you perform solo, there’s only so much you could do musically. When you play with a tightly rehearsed band, you can add so many more layers to the music and make it more interesting. However, there’s just something about performing solo or with X-Koamane that makes me feel so much more emotional about the songs.”

To find out more about Wayne Hsu, check out www.waynehsu.com or www.myspace.com/waynehsu. His EP and other merch will be available on his website sometime this month.