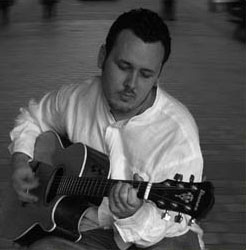 Tom Frankson is a talented acoustic artist, originally from the French-speaking Caribbean island, Guadeloupe, and now living in Villiers Sur Marne, France.   Although he is now moving more towards writing songs in his native language, his current work is in English.

I’ve always had a soft spot for acoustic artists.  I also have a soft spot for the French.  So, it’s no surprise that Tom’s music resonates so well with me.  There’s a sing-able quality that’s hard to resist, and since there’s almost no detectable accent when he sings, you’ll barely notice he’s not a local.

Something about listening to Tom’s work reminds me of sitting back in my college lounge, watching Howie Day perform several years ago.  He carries the same emotional and vocal command, and brings you a very down-to-earth comfortable sound, that you’d be hard-pressed not to be able to relate to.

Tom was kind enough to answer a few of our questions:

AX:  When did you start performing?

Tom:  I first performed with a band named “Overdrive.”  I was something like 16
years old, and I was playing guitar and singing.  But it didn’t last;  2 years, I think.

AX:  Do you primarily work solo projects, or have you worked with bands also?

Tom:  I played in some other bands, but there always was something going wrong. So one day, I decided to do things by myself, and performed alone with an acoustic guitar, and worked a lot on recording music.  I like playing with bands, but I truly prefer working alone, so that I can be sure that everything will be just like I thought.  It’s always hard to explain exactly what you have on your mind… so when I record a
song with my computer, I can do whatever I want, with no restrictions.  Of course, there’s not the band power, but it’s a choice.

AX:  Do you write music mostly as a way to express yourself, or do you have
an interest in making music your full-time career?

Tom:  I always wanted to become a full-time musician, and it’s still true, but now, with time, I realized how hard it is to do. Sometimes, I send some music to majors or professionals, but I have a big problem here in France.  I’ve always sung in English, and here in France… that’s a big problem, so I have to work on it.

AX:  What originally made you gain an interest in music?

Tom:  I think it’s my parents.  When I was a little boy, my parents were always
listening to music.  I was hearing musicians like Jimi Hendrix, The Beatles,
Weather Report, Stevie Wonder, and so many others.  It was a musical house,
and I always loved singing. My father was playing guitar, so one day, I took one and worked all night long.  In the morning, I was playing The Beatles’ “Rocky Raccoon”, and never stopped working this instrument.

AX:  What do you hope people are able to take from your music when they listen to you?

Tom:  Well… I would say: Feelings. There are no particular messages in my
music; I don’t fight against anything, don’t have lessons to give… Most of the time, my music is a picture of a moment or a feeling.  Sometimes, it talks about a dream I had, sometimes it’s just a story… I just hope people will feel it.

AX:  What made you choose to record in English, rather than French?

Tom:  It’s not really a choice… In fact, as I [mentioned before], my parents were
listening to English music, and I think that for years, I never could
understand that music could be sung in another language. Now, I’m working
on some French songs, because I can’t do anything in France if I sing in
English. But it’s really harder, because English is a singing language.  French can be too, but words are harder to find, so sometimes, it can be ridiculous… It’s really a [lot of] work.

AX:  What do you think are some of the biggest differences in trying to  make it in the music business between the US and France and other parts of  Europe?

Tom:  Well, I’ve never tried to enter into US Music Business, so it would be hard
to answer, but I suppose it’s quite the same everywhere… Luck, Work, Passion, Talent.  I think that nobody really knows the good way to become a
professional musician…

You can find out more about Tom Frankson, or listen to his recordings, at www.tomfrankson.com.  The site is in French, but you can translate it to English by clicking HERE.