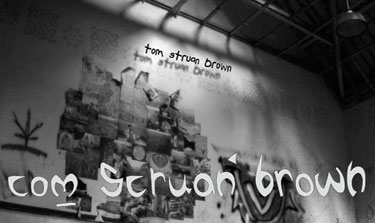 This month we cross the Atlantic Ocean to introduce you to Scottish singer/songwriter, Tom Struan Brown. Struan Brown, currently 24, started playing guitar at 16. He began performing while he was attending The Art College in Carlisle. While there, he participated in a music module which allowed him to play his own songs, and it gave him a lot of positive feedback. While there, he also studied Multimedia Design and Digital Animation. So what would inspire someone with his background to focus on music?

The Pogues, Damien Rice and Damien Dempsey were his biggest influences in the music industry thus far. Dedication, passion, inspiration, or rather the mixture of all three, combined with his positive outlook towards the future will likely help him in the pursuit of musical success. He has high ambitions, and if things go his way, maybe he’ll be one serving up the influence and inspiration.

Although Struan Brown isn’t against the idea of joining a well-structured band in the future, he currently utilizes his talents for vocals and guitar in a solo career. He has always been about making a connection with everyone who listens to his songs. His voice is what he believes is most unique about his material. It is through his voice that he hopes to be able to capture the attention of his fans, as they listen to each and every word that he sings.

The music charts in the UK are now including internet sales, local bands, and up and coming bands. This is a recent happening there, and before it was just a lot of basic pop. Now, with all the innovative new artists and sounds such as Brown’s, the charts are changing and bands such as Snow Patrol and Coldplay may have some competition that wasn’t foreseen a few years back. This can be seen as not just a breakthrough for the UK, but as an invitation for the world to follow. Maybe the unsettling trend here in the US will end, and we’ll follow suit. How satisfying would it be to see your favorite local artists pulling ahead of the cookie-cutter crap the labels spew at us day in and day out? Brown and the rest of the UK could possibly be the trend setters!

Brown’s voice is his strongest asset. His vocals are sometimes powerful, sometimes mesmerizing. His philosophy is that once you make a connection, you’re home free. It’s his voice that helps him make that connection. Have a listen, and enjoy. Just because the trends in the UK are leaning more towards a fair balance of indie and label artists, that doesn’t mean they still don’t need the support of their fans.