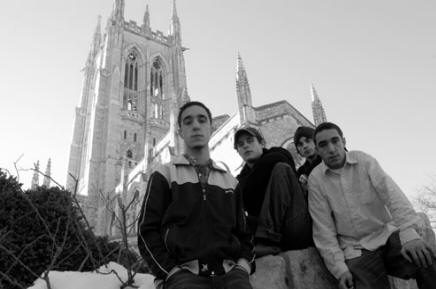 Sing-able melodies, lyrics that could break your heart, and did I mention twins? Well, these guys have it all … and much more. Straitlaced is one of those bands that just snuck up on me. I’m still not sure what made me decide to check out their tracks while scouting bands in the area. Usually I don’t spend a lot of time on bands that look particularly young, but I was very lucky to come across a few very young and very talented bands this month.

The guys are all just eighteen and nineteen years old, and while their subject matter fits that fact rather well, their sound does not. Straitlaced’s vocalist, Dan Sinkler, helps to bring an essence of maturity to their music that still surprises me every time I hear them. Dan’s partners in crime include Viv Peyrat on guitar, Andy Sinkler on drums, and Chris Strosser on bass.

Dan, Andy and Chris had been playing together since junior high, until Chris moved away – breaking up the band temporarily. Towards the end of high school Dan, Andy and Viv had started working with each other, and continued to do so without a bass player for about a year. However, the solution to their problem was on the horizon, and Chris moved back, rejoining the group. This incredible lineup was only solidified in September of 2004. Yet, you’d never be able to guess it.

While most bands I speak to tend to deny that they really fit into any genre, Straitlaced doesn’t mind simply being classified as an alternative rock band. The guys have been influenced by artists such as Fenix TX, Brand New, old school Blink 182, Matchbook Romance, Bad Religion, and The Ataris. I think that you’ll be hard-pressed to say these guys really sound like anyone else out there though. You won’t notice, because you really won’t care. You’ll be too busy thinking back to when you were a bit younger and experiencing a lot of life for the first time. Sometimes the songs can almost bring a tear to your eyes, and sometimes you won’t be able to help smiling just a little bit.

The boys behind Straitlaced were destined to be musicians. They all come from musically talented families, growing up with music in their lives. The guys aren’t hoping to change the world with their music. Rather, they’re willing to take it as it comes for the time being, enjoying their music as an instrument of creativity and making it their life’s work if the opportunity comes along. According to Viv, “Basically, we want as many people as possible to listen to our music and enjoy it. We just want people to be able to relate to what we write and play.”

The guys are hoping to be able to start touring the east coast over the next few years, spreading their name and their sound. Straitlaced are well on their way to a successful future. They’re not only due to record a few more songs, but they’ll be shooting their first music video in the beginning of February with Speed55 Films. Dan, Viv, Andy, and Chris put music first in their lives. Why? According to Viv, simply “’cause that’s what [they] love to do.”

You can find out more about this remarkable young talent by checking them out live on February 20th at the Speakeasy Café in Upper Darby, or by looking through their website at www.straitlacedrock.com.