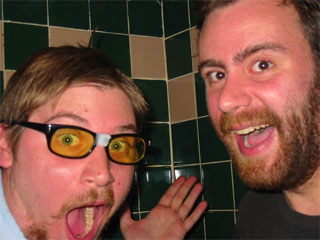 There are a small number of comedic musicians out there. We know Adam Sandler from Saturday Night Live and his “red hooded sweatshirt.” But there really aren’t too many versatile artists who get up and really entertain us with a little wit. Now, in the same vein comes Stucco Lobster Breadbox.

What started out as a joke itself has turned into eleven years of creativity, silliness and the tinkling taps of the xylophone. Currently SLB is comprised of Jeremy “Germ” Bell, who is vocals and the master xylophonist, and Jonathan Pron on guitar and vocals. During the next couple months, the Philadelphia area will have the opportunity to see this interesting duo live.

And that’s no laughing matter—well—actually it is.

AX: How was the band started?SLB: The band started out as a joke about 11 years ago. None of us played instruments at the time, but decided that since we were finished high school, it was time to start a band. Four of the original members sat in a circle one night, saying a random noun and taking turns clock-wise. Eventually, “Stucco Lobster Breadbox” got our name. Runner up was “Viking Sofa Pudding.” In the summer of 2004, Jon and Jeremy met. He joined the group about the same time everyone else called it quits.

AX: What they do you do outside the band?SLB: I could say that we’re both in the credit industry. But that’s boring. Let’s see…. Jon’s a bounty hunter, and I’m a hand model for Jergen’s lotion commercials….And a semi-pro rugby player…. And a Chippendale.

AX: What brought the members of the band into music? Why do you do what you do? Is there anything that you want fans to take from your music?SLB: I don’t know if we’re a humorous music group or a comedy act with musical instruments. Our goal is to make the audience laugh without cracking ourselves up. Then again, one of Jon’s goals is to make me laugh at each show. It usually works.
AX: How does the band go about coming up with material? What’s your creative process?SLB: I’ll write the lyrics. Usually inspiration strikes in weird ways, and if I come up with a line or idea that makes me snicker, I’ll try to base a song around it. Jon usually writes the music, and Jeff wrote most of the music when he was in the band.

AX: How would you describe your performances? What type of expression is it?SLB: Seeing us perform is like watching a stag film with They Might Be Giants and Tenacious D.

AX: How long have you been on the local circuit?SLB: The original lineup was together, off and on, for 11 years. Jon and I have been together for just over a year.

AX: How would you describe your music to people?
SLB: Folk gone horribly wrong.
AX: What’s the band’s hometown?
SLB: Currently, I live in Newark, DE. Jon’s in Linwood, PA.

AX: What do you consider the best parts of doing what you do? What are the most difficult or challenging?
SLB: Entertaining is something that I love doing. I love it when people laugh at the jokes, or stare back with amused yet horrified expressions. The challenge comes in finding supportive venues to play, though we’re getting a lot more shows lined up these days. Fitting shows around work schedules is difficult as well. It limits how far we can travel during the week.

AX: Of the venues/cities you’ve been in, what’s your collective favorite?
SLB: I think we both loved the Harrisburg gig. We played a youth center there. 15-17 year olds are very receptive of us. We’re like a potty-mouthed Menudo.
AX: What do you feel sets you apart from others in the area artists?
SLB: We have a toy xylophone.

You can find out more about Stucco Lobster Breadbox by visiting www.myspace.com/jeremyandjon.