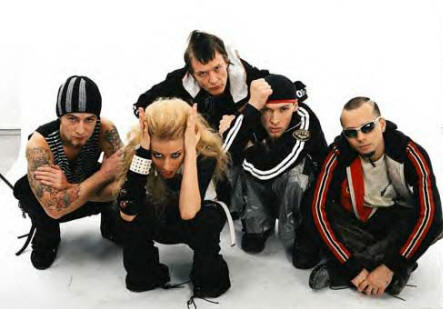 In a surprising mixture of sounds, SLOT, a Russian pop-metal band manages to enthrall and entice a listener’s consciousness. With lyrical singing that is rap-like, combined with rock and a hint of techno, SLOT has hit upon a new and most delicious mixture of melody.

SLOT formed in 2001, Cache, ID, Teona and with former band members. About a year ago, Teona left the group due to scheduling conflicts. Her replacement, Uliana, called IF, is now the female vocalist for the band. According to the band, she has the “…voice of a Siren and a panther’s temper.”

Having already appeared on the Edge FM (theedgefm.net) SLOT will be appearing as an opening act for 6 RAMMSTEIN shows that have been scheduled from February to March 2005 in Russia.

With the re-release of their first album, SLOT has included a bonus track, Night Watch, their hit single appearing in a Russian movie, of the same title. The movie was big in Russia, and I was informed that 20th-century Fox has bought the rights to the name and the script, and may be planning an American remake in the future.

Right now the band is in the studio recording their second album with a new bass player and a new drummer. Watch in Spring 2005 for more information.

You can download Night Watch directly by clicking HERE. The site’s in Russian, but if I could figure it out, so can you. The English version of their website is scheduled to open sometime this month. SLOT’s album is available for sale by e-mailing shop@slot1.ru. Paypal is accepted and the CD is $21.19 US, plus shipping and handling.

Here’s to hearing them soon. Cheers.