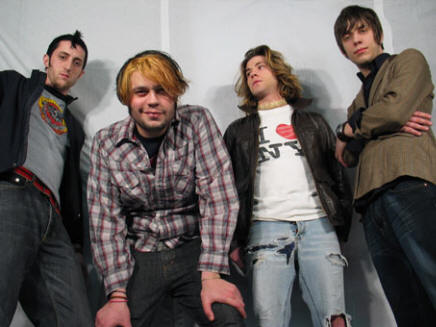 The Sleeping is a four-piece rock band from Long Island, NY with more attitude and charisma than any stage can contain. The guys recently finished an east coast stretch with our local boys, The Twilight Collective. Harry, TTC’s drummer, asked me if I’d check out The Sleeping while I was at one of their tour stops in Wilmington, DE, and if I’d consider doing a write-up for them. I figured, what the hell, I’m a NY kid myself, so giving it up for some of my own “locals” couldn’t hurt. And the fact that TTC’s pretty awesome themselves made it easy enough to trust their judgment. In retrospect, I’m damn glad I did.

I went to the show at The Harmony Grange having not heard The Sleeping yet, and not really knowing what to expect. I wasn’t disappointed. I’ve never seen a crowd so spellbound by any artist. The fan reaction was incredible, and unbelievably contagious. The band fed the kids the energy, and then pulled it back into their own stage presence. It was an amazing give-and-take relationship, to a degree that you may expect from a major national act (although you’ll rarely find it), but not from a regional band playing somewhat outside of their element.

Watching the guys play off of the crowd, and vice versa, was incredible to watch. I always pay attention to crowd reactions when I check out a band, but this was unique. I’ve never seen such a cult-like scenario, with the kids obsessively looking on, doing whatever they were told to do. There are always a few fans who seem unusually dedicated to any artist, but this was the first time I saw just about every person in the room caught up in the sway. As long as The Sleeping was playing, these kids weren’t going anywhere.

I took the opportunity to check out some of The Sleeping’s recorded tracks a few days after the show. Then I went back and reviewed my video of that night. There really was nothing left to be desired. Their live performance was impressive, as are their recordings, but they’re really one and the same. The Sleeping are truly performance artists, and they could hold their own with absolutely anyone, having already toured with such acts as The Escape Engine, Fordirelifesake, Taking Back Sunday and Bayside.

The Sleeping is Doug Robinson on vocals, Cameron Keym on guitar, Sal Mignano on bass and Joe Zizzo on drums. If you do nothing else, you need to check these boys out live. They’ll be back in our area April 3rd, at the Harmony Grange in Wilmington, DE. You can check out their One Day Savior Recordings debut release, “Believe What We Tell You,” and you can find out more information and additional tour dates from this up-and-coming group at www.thesleeping.com.