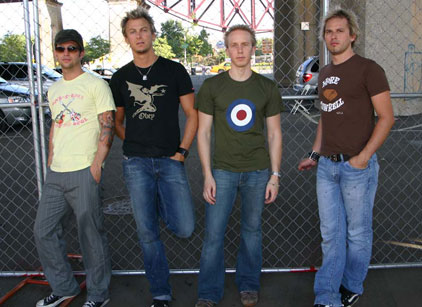 Described as “Straight Melodic Pop/Rock” Full Out Freak is just the band to check out for a high energy show with a comfortable feeling of true-to-life lyrics and energetic band members. Started in 2003, this northern New Jersey band matches the intensity of rock bands like Vertical Horizon and Third Eye Blind with their emotional lyrics and powerful melodies. But, lead singer Joey Aparicio describes it best as “accessible for most people who appreciate good music regardless of what kind of music they prefer.”

Beginning with “an arsenal of material” and the desire to “forge a distinctive sound,” Full Out Freak started with just a singer and a little help from his friends. Today Full Out Freak is an all out fabulous band, playing New Jersey and New York City bars and can be heard on XM radio, Live 365 and MusicChoice.com. For years prior to the actual creation of Full Out Freak, Aparicio had begun to write songs and, with the help of friend Eric Berkowitz on bass, the songs began to form. “We didn’t have a drummer when we started recording” said Joey, who recorded most of the first album solo. “So Jonathan Mover actually played drums on a number of tracks and our first drummer, who joined while the album was still under construction, played the rest. The rest of the album was recorded at my studio in New Jersey.” With a little shuffling the band finally found its footing, adding Justin Neighbour on drums and Tim Quick on guitar and backing vocals. The songs are created mostly by Aparicio who brings the lyrics and are tweaked and arranged by the fellow members until the song is complete. “I love the studio,” said Joey. “Recording and producing… I find that part of the creative process the most rewarding.”

Aside from being in the studio, Full Out Freak has been hitting the live music circuit for two and a half years at venues like CBGB’s in New York City and Maxwell’s in Hoboken. Accomplishments include being voted best rock song and best male vocals on www.Garageband.com, along with XM radio’s artist of the week. But the biggest goal for Full Out Freak is for the fans to leave their shows with “a feeling that they can identify with us as people based on what we are saying and how the music affects them.”

So, if Hoboken is too much of a gas guzzle for you, all it takes is your nearest PC to get your “freak” on. Their website, www.Fulloutfreak.com, bursts open with the energetic opening to “I’ll be damned” while a visual flare of icy blues and warm reds strike your eyes. The site includes all the rock star necessities like shots of the band, merchandise, bios and even video of the band doing their thing. A link to the band’s MySpace.com page lets you download four songs. You can also see the “freaky” fans they have picked up along the way, what’s been said and you can even say something yourself. Just be ready for an upbeat barrage to get you moving and wanting more.