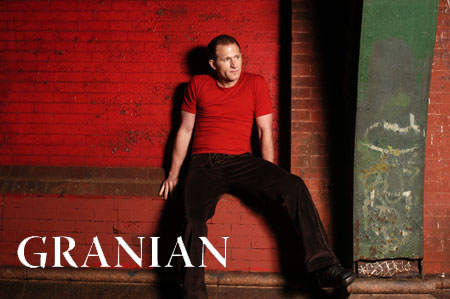 Historically, when bands have been compared to the likes of matchboxtwenty (are we still doing the apathetic non-capitalization, non-numbers thing?) and John Mayer, the noses of rock snobs and mere melody mortals have spontaneously and disgustedly turned upwards accompanied, at times, by the inexplicable urge to barf buffet leftovers all over said bands’ collective discographies.

Formed in the mid-90s, Granian, (kinda) named after the now (kinda) solo Garen Gueyikian, isn’t entirely a single musical entity. In a way, he is the folkier version of Dashboard Confessional pre-plugging in of amps, in that, essentially, he flies solo but still draws inspirato, and more importantly, gets some very musical helping hands from friends with a knack for writing kick-ass, heart churning melodies and riffs, and blessed with the abilities to cross bridges, climb musical ladders, and fill in those pesky and permeable mile-wide gaps in the creative process.

An obvious fan of nostalgic 90s alt-rock and grunge era bands like Live and Guster, Granian not only borrows tricks from his flannel-happy predecessors, but also pays some serious homage to that now dead era in music by channeling the all-too-relatable lovelorn angst, and “f*ck your world” panache so musically notorious in those formidable years, but never seems campy in the shi*ty tribute band sort of way. His lack of dance disco beats and post-punk sensibilities that are insanely popular among the MySpace set should be revered, not scoffed at, for his crunchy guitars and dead-on lyrics are more than enough to fill the shot glass worth of space in rock kids’ tighty fashion-core pants. In fact, they could outfit an entire army of pissed off scene queens and princes of post-punk. Don’t be surprised though, if you catch the man himself dancing alongside you at a Fall Out Boy or Head Automatica show as he and his iPod are self-proclaimed fans.

Granian’s release, “On My Own Two Feet” while not entirely a technical rule-breaker, is entirely fun for what it is. Songs about exes and finding oneself can sometimes border on embarrassingly brooding or painfully pretentious, but these guys make it sound simple enough to relate to and confusing enough to, well, relate to. Gueyikian has a knack for the whole Impassioned Singer/Songwriter thing but doesn’t sacrifice sentiment for sellability.

Most of the songs from “On My Own Two Feet” were practically made for radio airplay, filled to the riffs with hooks for miles and fashioned into perfectly proportioned on-air packages, but, like most indies (literally, not Killers “indie”), they will ultimately find their true fans on little-town college campuses and mp3 blogs alike. Not that there’s anything wrong with that. Plenty of “It Bands” (See Also: The Arcade Fire, Bloc Party) owe much of their notoriety to internet media and hyped-up word of mouth, so if such a fate awaits Granian, they should be kissing their cable modems and blessing their blogs before bedtime. Speaking of which, Gueyikian himself is more than a fan of college kids, as it was college kids who made one not-so-memorable gig that much more…comforting, to say the least.

“After cleaning the dust and cobwebs off of the ‘vintage’ [sound] board, it took me about half an hour to locate the necessary cables and microphone to run my own sound. After a quick and painful sound check–if you can call it that–I was ready to start the show.” he recalls. “Luckily there was a nice sized group of Vanderbilt students who came out to see my Nashville debut, so I started the show with a smile on my face. Other than the students, the regular clientele was” he pauses “toothless and they liked to play darts. [Needless to say,] the best part was the end of the show when the students took me out to another college bar and got me wasted on SoCo and Lime.” Sigh.

“On My Own Two Feet” acts as Gueyikian’s aural scrapbook in the sense that each song, like photographs, reminds him of what he has come from, and more importantly, where is he going. He finds himself as the album progresses–a constant emotional growth spurt really–and with his fresh outlook and brand spankin’ knowledge, his self-exploratory tryst is complete. Kind of. In the perfect world it would be, but in that housing singers and songwriters, poets and artists, the emotional journey is one that rarely remains motionless, but we hear they prefer it that way. “I’m constantly writing, thinking…the wheels are always turning, especially when I’m driving around the country on tour. Influences come from everyday life. How you relate to everything around you, whether it be people, places, moments,” Gueyikian explains, completing the portrait of the Lonesome Traveling Man in perfect Lonesome Traveling Man fashion.

One reading this might be rolling their beady little eyes into the backs of their perfectly coifed little heads wondering what’s got this dude acting so seeeeerious all the time, and while music should be a serious venture (not saying those who rock for fun totally suck…but you know what I mean…Those who are really into their craft are awesome, am I right?), Granian The Guy (as opposed to the musical genius, of course) is surprisingly at ease and good humored. For instance, when he’s not dreaming of making musical history with Pearl Jam (VS. era) and Chris Cornell (Throwing Copper era) he’s sending messages to Collaboration Heaven in hopes of cutting a dope track with Murder INC’s resident chorus line, Ashanti. “Everyone does a song with her right?” he muses. Yes, yes, they do, Master G.

Gueyikian, though, is full of such charming anecdotes, the kind that spill from the lips effortlessly and are not at all self-aware and pretentiously icky, so talking to him is pretty much like chatting it up with your (totally good looking) next door neighbor. If your (totally good looking) next-door neighbor released an album and traveled around the country, I mean. Just sayin’.

But still, no matter how far across state lines he finds himself, Gueyikian still holds New Jersey near and dear to his rock and roll heart. And surprisingly, his affections have nothing to do with the sheer awesomeness of South Jersey girls’ accents. For shame! “It’s equidistant from many big cities on the East Coast making it easy to tour independently and hit up a lot of great college towns. Plus it’s a stone’s throw from the greatest city on the planet, Belmar, NJ! No silly…The Big Apple.” Do you see what I mean? Charm City over here! And his passion is catching. Let’s just hope the right people are on the receiving end, as rock and roll only engages certain types, judiciary ones not included.

“I remember going to court for a traffic ticket a couple years back. I was waiting for my case to be called when an obvious 80’s rocker was called before me. The first question out of the judge’s mouth was, ‘What do you do?’ His response, ‘I’m a musician.’ After the judge ruled, his last comment was, ‘Get a real job.’ [Thereafter] I quickly changed my plan of attack and kept my musical aspirations to myself.”

Gueyikian, with his engaging stories and even more engaging songs, is the brand of musical idol not found strutting around on your glowing fun box, nor in your glossy magazine spreads decked from head to heels in designer duds, but rather, sitting next to you on the rail system singing songs into his technical little recording gadget and penning the dreams and aspirations of Everyman onto loose scraps of paper promises.

But like every chapter on “On My Own Two Feet,” my time with Garen Gueyikian quickly comes to a close, but not before adding one more anecdote for the road. “And Judge,” says Gueyikian far too damn good-naturedly, “If you’re reading this…bite me.”