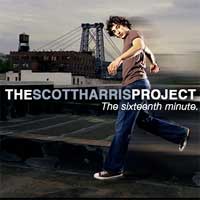 Mix John Mayer with some actual oomph, and you’ll have Long Island’s Scott Harris. The Sixteenth Minute isn’t necessarily anything you haven’t heard before, but rather a quality contribution to the commercial acoustic trend we’ve witnessed over the last several years. What sets Harris apart is that he’s able to not only fill the shoes of successful acoustic artists before him, but he transcends previous works by bringing an uncommon energy to common themes, and adds a new layer to a familiar sound by incorporating apparent jazz, and sometimes almost Latin, influences within his work, with 3 Days being a perfect example. Scott’s vocals are soft yet commanding, and when combined with his natural song-writing ability and a catchy rhythm, he produces some very commercial radio-friendly music. Live It Up starts you off on an up-beat, almost bouncy note, emphasizing Harris’ youth and energy, not to mention talent. Wonder takes us to a more mellow, perhaps classic, side generally associated with acoustic artists like Mayer. (The vocal similarities are sometimes eerily familiar.) Same Dream is my personal favorite, reminding me of an opportunity I had a few years back to see Howie Day plan an acoustic set on my college campus, before his deal with Epic. The similarity isn’t necessarily in the general sound or vocal work, but instead it’s the fact that this is the song where I feel Harris comes across as being the most intimately involved in every aspect of his music, the same thing I felt watching Day perform. There’s an almost inexplicable depth to Harris’ music, and it would be a refreshing addition to the music library of anyone with an interest in acoustic, rock, or even jazz.