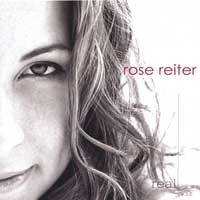 In the 90s when female fronted, down-tempo, piano rock graced the airwaves, sold millions of records and sold out concerts, it could have been considered the prime era for this genre. As we’ve seen from some of those leading ladies, it’s kind of tough to make it playing the same music ten years later. Canadian, Rose Reiter is on that bandwagon, and if she had written her tunes a decade ago, it’s easy to say she would have blended in perfectly. However, this music comes to us in an age where it might take a few listens before it wins you over. Her voice is incredible, so don’t let that sway you. Real v3.0 is almost the perfect title for this record. Its not souped up with extra instrumentation, or has any processing on anything. It’s raw, man; live band and everything. Soothing, calming, honest; Real v3.0 is one for the ultimate fan who isn’t in need of that hit single. Also, versions 2 and 1 sound like they wet the same taste buds. The lyrics are standard. If there was one thing lacking from the music, that would be it. Otherwise, the album is beautiful, and if I was in need of something to throw on to set the mood right, or relax on a perfect winter’s eve, and I was worn out from all the Christmas music they hype up, this would be my record of choice. “Phantoms” is especially stripped down. I think its one of her more “honest” pieces, talking about battling thoughts within. The simplicity of just the piano gives it just that. “Shakin’ My Head” is more of a dance song and is completely different from the rest of what she has to offer. Nice monkey wrench to the bunch, beautiful, though it’s tough to really get into, because you’re already totally relaxed from the other offerings. Being a fan of Canadian pop, Rose fits in quite nicely and has a solid voice to stand her ground. Give her a baby grand in a nice hall and I’m sure she’s right at home