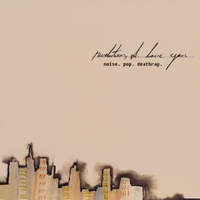 Jason Reynolds and Rob Lindgren, a duo called Revolution, I Love You, refer to their music as “equal parts drum machines and Fender jangle, fuzz bass and piano.” And dang, if they’re not absolutely right! This music may be relatively indescribable, but that doesn’t mean it’s not also mighty fine. Noise. Pop. Deathray. is comprised of only six tracks, yet each one is entirely different from the rest. Revolution, I Love You’s overall affect might just restore your faith in rock & roll.

With its dance music-inspired percussion and alternative rock guitars, “My Baby’s Gonna Save the World, What’s Your Baby Gonna Do?” simply burns with raw emotionalism. It is followed by the verbosely titled “Open Letter to The President of the United States”, which — while not exactly the sort of correspondence our head of state most likely reads — roars with punk power and just a touch of reggae dub. It also incorporates a weedy synthesizer part that weaves in and out of the mix at just the right moments. Toward the end of the track, there’s even a great hand clap rhythm. The very next song, “And She Said it with a Straight Face”, includes music hall piano for an entirely unexpected –- but welcome — feel. As you can plainly see, this disc is one rock & roll variety show.

Love and revolution are usually mutually exclusive terms: anyone who falls in love with a political revolution oftentimes has misplaced affections. Nevertheless, it’s easy to get all mushy when listening to this pair of musical revolutionaries. The only criticism to be leveled at Revolution, I Love You –- and it’s a minuscule one at best — is that six songs are not nearly enough. With Revolution, I Love You, let’s all pray for rock & roll world domination.

1. Can I Get The Door For You?
2. My Baby’s Gonna Save the World, What’s Your Baby Gonna Do?
3. Open Letter to the President of The United States of America
4. And She Said it with a Straight Face
5. Lullaby
6. The Prettiest Feather, Or the Straightest Quill?

To check out more about Revolution, I Love You and hear its music, please visit http://www.myspace.com/revolutioniloveyou.