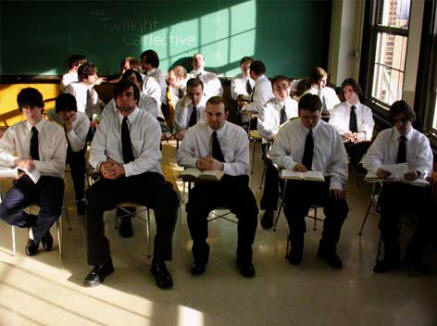 Influences: “Our influence are from all over the map. We all come from a pretty heavy background, growing up listening to a lot of hardcore, punk and metal. For most of us, this is the ‘lightest’ band we’ve ever been a part of. We may not sound like them, but as far as songwriting, we are heavily influenced by Queen. Listening to Queen made me realize that you can be the best guitarrist, drummer, vocalist, etc. in the world…but if you don’t know how to put a song together, you have nothing. We are also influenced by bands like Death by Stereo and Lagwagon, because even though they are talented and write serious, intelligent music, there is a vague humor in their delivery…you can tell they don’t take themselves too seriously and that they still have a lot of fun doing what they’re doing.” – Matt

Available Online: “The Boys Next Door,” and “City of Industry”

Highlights: Check the guys out on their east coast winter tour, with The Sleeping, February 9 – 20. You can find more details at their website!

Comments: I wanna start off by saying … these guys f*ing rock! If you don’t take the time to check them out, you should just be shot for sheer stupidity. Now look … when I’m checking out a band, I stay as uninvolved with the music as I can. Unless I really love your stuff, you won’t often catch me with my foot tapping, head nodding, or any of that crap. I listen to the song, take it in for what it is, and place judgment on what I like and what sounds like sh*t. Anyway, I came across these guys online. I thought they had one of the most interesting publicity shots that I’d come across, so I figured, what the hell? I checked out their stuff on the spot. And oh … my … god! They f*ing rock! They f*ing rock! They f*ing rock! I could barely stop myself from getting to my feet to start jumping around. Until these boys came along, I hadn’t realized how (Yuck! Dare I say it?) “mature” my tastes in music had gotten. So, I owe these guys some thanks for my musical “re-awakening.” And you … drop whatever the hell you’re doing, and just check it! And don’t forget to come back in March. We’ll be running a full, all-out feature on the band, including a chatroom interview, tour journal, and other good stuff. Check back then to find out all you want to know and more about the amazing fellas of The Twilight Collective!