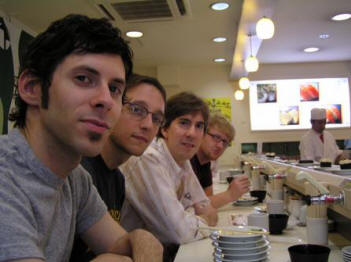 How would you describe the word music? Maybe a way of expressing oneself, or possibly a creative way to speak. So many ideas and suggestions could be given for an answer, but I think that Kyle of The House Lights said it best when he described music as an “escape from life”. When Kyle said it was an escape from life, he wasn’t kidding, because the music that The House Lights bring to the table truly does allow for the eyes to shut and the ability to drift off into your own thoughts. Before we do however, how about I let you in on just who The House Lights are.

Project67, a band of years ago already consisted of Kyle (lead vocals) and Ryan (bass). Through the music scene they came into contact with their current drummer Dave, and John (guitar) was brought in as a friend of a friend. Together they formed what was known as Four Minute Mile, but later changed to their current status as The House Lights.

Creativity as a whole is what The House Lights are all about. They all work together on their songs, from the rough draft of it to the final outcome of their pieces. They all participate in making it perfect! How could you not be creative when you have influence of such bands as the current and hot Green Day, or something older like The Beatles or The Stones, oh, wait, lets throw in some Metallica and testament also! “As a musician, you should take it all in, let everything you hear influence you!” Kyle added.

Have you ever taken an easy way out, a shortcut, or given something 90% when you could’ve given it your all? That isn’t the style of The House Lights. The band sings about real events, and is honest with every song they put out. This isn’t a group of conceited guys by a long shot, but it is a band that will go out there and sing to the heart, and not think twice about it! They put one hundred percent in their material and all the songs have a point to them.

The House Lights have been playing a little further than the local venues recently. In fact, they played in the land of The Rising Sun, yeah, Japan! New to Japan, where nobody ever heard of The House Lights, they attracted roughly one hundred and fifty kids to watch them perform and do their thing, but later when coming back to the good ol` USA, they were able to get 20 kids to watch.

Commercialism really has had an impact on bands who are trying to make it, and who can make it, such as The House Lights. Sure, they aren’t finely tuned pop boys aged from 18-20 and shoved down your throat by the system because they are told to be liked – these guys are doing it the real way, the hard way, and with the determination that these guys possess, it is just a matter of time before they find that dent in the system, split it apart and show the world what they are made of! A risk yes, but a risk that they are willing to take.

While we are talking about taking risks and challenges, let me be the first to tell you that this is a group that are the high flyers of the music scene! They take risks going out there performing in front of everyone with the lyrics they made from deep within, not knowing what the response will be, accepting whatever it is that they get in return. Hell, they even challenge themselves by taking great rock songs and ripping them apart till you cannot even dance or nod to them anymore.

Memories are sometimes used as inspirational boosts in the right direction! Kyle uses all of his fondest memories to keep him on track in the direction to success. Leaving a fairly successful band to form his own was probably a huge risk that was criticized by many and laughed at by most, but it is Kyle who is getting the last laugh, as it was with Four Minute Mile that he helped to make the “Never Been To LA” cd. Also with Four Minute Mile they won the WZZO Backyard Bands Competition. He was able to perform at Musikfest with the band as The House Lights and they are currently with Fake Chapter Records. Throw in their touring of Japan, and it makes for a lot of great memories and proof that he did the right thing. The effort and hard work do truly pay off in the end! The end isn’t close yet for The House Lights however. As long as music remains and they are able to continue to have fun doing it, The House Lights will be around. If you wanna try to catch them, May 30th, 10:00-11:00, at Mayfair in Allentown Pa, they will be performing for free and all ages are welcome! Grab some of their gear at www.fakechapter.com!