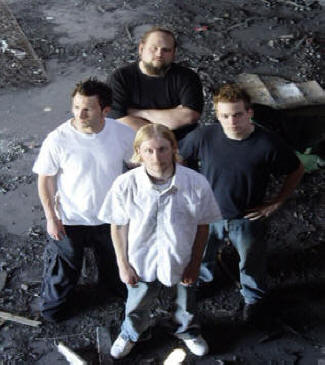 Pan.a.ce.a – literal definition: a cure-all – AX definition: something that crawls under your skin like a f*ing parasite, infecting your blood, your mind, and your soul, and whose only cure is downing another shot of their poison; only the poison of Pan.a.ce.a isn’t too difficult to stomach.

Pan.a.ce.a is based in Bloomsburg, PA, and brings together the talents of Mike Morgan on bass, Kevin Harry on drums, Paul Young on guitars and vocals, and Tim Farley, whose lead vox help to give the band a sound that is sometimes almost a cross between old-school Staind and Bush, and sometimes reminiscent of nothing I’ve heard before. The guys’ music is self-described as “edgy, intelligent, ballsy, and in your face!”

The band has been a fixture in the local music scene since the Autumn of 2001, but the current lineup of Pan.a.ce.a has been together for only a few months. Does that stop them? Hell no! They sound like they’ve been together forever.

The fellas took some time out of their busy schedules to answer a few of our questions:

AX: Can you give us the story behind the band? How was Pan.a.ce.a started?Kevin: Around the age of 17, myself and Mike were in a band together. At the same time, Tim and Andy Wojtowicz (the original guitarist) were in a different group together. At a show, the two bands played together, and Mike had said that it would be great if the band had Tim and Andy in it.

Tim: In and around the same time, I moved out of the area to New York. But I eventually moved back to Pennsylvania to find myself, and ended up meeting up with these guys again, whom I had known.

Kevin: We were all between projects at the time, and it just sort of fell together.

Mike: But down the road, we had some lineup changes, and eventually got hooked up with Paul.

Paul: Around the time when Pan.a.ce.a was starting to play a lot, I was involved with my band Imperfect Vision. We had been around a while and played all over PA & NJ. We had worked hard to gain a great reputation around the scene. But one night I went out to Club 77 in Luzerne with a group of friends to see this “new” band that was “awesome”. From the first lyrics out of Tim’s mouth I was FLOORED!!!! I said in the back of my mind if they ever needed a guitarist, I would pursue it. So months passed and Imperfect Vision was getting to be an unbearable situation. And by both the Internet and word of mouth, I heard Pan.a.ce.a was looking for a new guitarist. Well, that was it. I learned all their covers and originals in one or two nights and then contacted them. And the rest… is history!

AX: What brought each of you into music in the first place? Is there anything in particular that you hope your fans take from your music?Tim: This is my passion and my love. I want fans to take what they will from all I can give.

Mike: I was very influenced by my father, who was a touring musician.

Kevin: The “Wildside” video by Motley Crue, when I was a kid. From the moment I saw it, I knew what I wanted to do with my life. I also love to perform and be in front of people. There is no feeling like the one on stage. I want our fans to take a feeling of happiness and some stress relief in listening to us and coming to see us!

Paul: Actually, I was just always intrigued by the guitar. Plus, I am a music Lover! I would die if I didn’t have music in my life in some shape or form. Music and creativity is more power than any weapon or position! I really want the fans to take whatever they can out of what we are doing, and hope they get what we are really doing. We are not money-hungry vultures out to make a $. We love what we do, and pour our hearts, souls, minds and whatever else [is] needed into this. This is a lot of sacrifice to do what we do. But I would give ANYTHING to do this, especially with these 3 guys!

AX: Where do you see Pan.a.ce.a going in the future?Mike: We all see the band recording, touring, and making a name for ourselves in the music industry. We have the talent, drive, and a great foundation to succeed in the music business.

Kevin: I see the band having many successful albums. We are all working our asses off to get better and accomplish all we want. We are prepared to hit rock bottom to get to the top!

Tim: I see the band touring the world!

Paul: I see this band taking over the world!!!

AX: What do you consider the best parts of doing what you do? What are the most difficult or challenging?Mike: We all agree that the live show is the best part. Seeing fans react and sing along to your songs is just something you can’t put into words.

Tim: The most difficult is holding down a day job on top of all of this.

Kevin: To top it off, trying to keep the business end of the band rolling is becoming increasingly difficult, as we get busier and busier.

Paul: Myself, more than anyone, is very engulfed in the business end of the band. That is only because I have the most time available to dedicate to it. And I am a meticulous pain in the ass, and make things happen!

AX: What sets Pan.a.ce.a apart from other area artists?Tim: Our passion, our love for each other, and our multitude of influences.

Kevin: Passion. I have been searching for bandmates that are as passionate as I am on stage! Pan.a.ce.a is that! We feel our music at every show, and the fans can see that!
Mike: Definitely our diversity and our collection of influences!

Paul: I agree 100% with Mike. We all love different styles of music. Mike is into Motown and funk, yet has a burning love for metal. Tim loves folkier music, but is into TOOL. Kevin is into many different styles of music and drumming. I am into every type of music. But I love stuff with a good groove; Hip Hop, R&B, Rap. But my heart is into this style of music! I will always love hard rock with catchy lyrics!! We try to bring all of this to the table to create what is Pan.a.ce.a. One thing that sets us apart from others is our drive. We are constantly kicking down doors and not taking no for an answer! We push the envelope … not only musically, but in the business.

AX: What other bands have each of you previously been a part of? What do you think gives this particular lineup staying power?Tim: My former project was a band called “Crooked Halo”. I believe this band has the staying power, because we are professional & the best of the best! We are destined for greatness!!

Kevin: My biggest project until now was a band called “Kraven”. We had played with Breaking Benjamin a few times before they hit. We make a lot more headroom each time we play. We are taking big steps and each of us is dedicated! I would die for this cause!

Mike: I also was involved in the band “Kraven” with Kevin.

Paul: I was involved with many big projects over the years, but my most recent was Imperfect Vision. I have played with the best musicians PA has to offer over the years. But none is more dedicated than these 3 guys! I feel we have what it takes as a unit, as friends, as family and as professionals to overcome any obstacle put in our way to succeed!

AX: What are some of the best shows you’ve played? Have you won any awards or brought in any big media attention?Mike: We all agree that the best show is EVERY SHOW! The fan base keeps getting bigger and bigger every time!

Kevin: But still some of the craziest shows are right here at the home base … Harry’s Bar and Grille.
Tim: We recently won The Coors Light battle of the bands, ousting 24 other great bands! We have also won several other Battle of the Bands, which we are extremely proud of.

Paul: We also have had some write-ups in local music magazines and newspapers, which really helped push the band along!

AX: Is there anything else that you’d like to tell our readers?Paul: The fact that we are the most grounded bunch of individuals, and that we take nothing for granted! We are just fans who have been blessed with this gift! We are honored that people come to see us and dig what we are doing. Plus, Tim can dance like it’s nobody’s business!! Mike has a unique nickname, and Kevin is the human beatbox!!

Tim: And Pauly can dance and rap like it’s his job!!!

So there you have it! Now get your ass up and out to one of their shows, and you can see first-hand why the Lehigh Valley-area artists are the best around! For a full show listing, or to pick up some of their hot merch, visit their website at www.panaceacures.com.