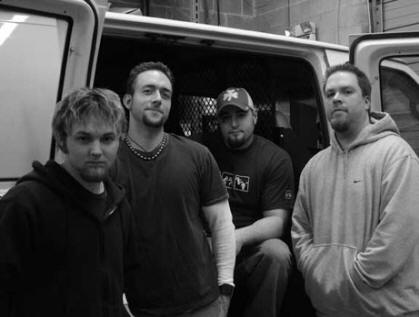 Philadelphia’s original rock band, Undercast, combines the talents of Nick Santone on guitar and vocals, Matt Janicki on guitar, Pat McGraw on bass, and Rob Hall on drums. Undercast seduces the senses with their melodic style. As soon as they suck you in with their trance-inducing vocals, they erupt with an energy that’s a little unexpected, but a far more typical component in today’s rock. But don’t worry … they bring you back down gently.

Undercast formed in mid-2004, originating from members of Nick’s former band. Matt soon joined, followed by Pat. Undercast’s original drummer left in late 2004, leading to the final addition to the current lineup, with Rob joining in early 2005. So really, these guys are a fairly new band. Listen to them … you won’t be able to tell.

I definitely feel that Philly’s a bit lacking in the original music scene. Get pissed if you like, but the Lehigh Valley’s simply got them beat. At least with rock. However, I’d have say that Undercast is seriously the most talented and most intoxicating rock band that I’ve come across from Philly, and I’d put them above even the best Lehigh Valley bands I’ve heard as of yet. They’re f*ing amazing. Simple as that.

Moody rock bands typically don’t do anything for me. Undercast openly admits that they fall into that broad group, calling themselves a “moody and melodic hard rock” band. Although it’s true, I still can’t resist their sound. There’s something different, that little je ne sais quoi that these other brooding rock-band-types are just lacking.

The members of Undercast were all influenced to start playing at different points in their life, but they share one common goal with their music … escape. Music serves as their “outlet to everyday life,” as Rob put it. I suppose that’s true for a lot of musicians. But what’s a little bit different is the fact that Undercast’s music is a great escape for the listeners as well. No matter what’s going on, if you play some of their tracks, I doubt you’ll remember for very long. Whether you relate to the lyrics or not doesn’t matter. You’ll relate to the music itself. It has a magnetic quality that draws you to it. It latches onto whatever’s on your mind, and leaves you in an almost euphoric state, where nothing matters but the music.

I asked the guys what they feel some of the best and worst things are about playing their music. Here’s what they had to say:
Matt: Being able to play at loud volumes, to the point where the sound shakes your soul. I love the dynamic element and vibe of playing with good musicians, especially in a live setting. The most difficult for me is probably gigging. I love to play, but I hate the bullsh*t that accompanies a live show … the waiting, carrying heavy gear up 75 flights of steps, etc. I tend to drink too much if I have to wait for a few hours.

Nick: Being in a band, in general, and being able to create something original that can influence or change anyone. I think people take for granted how important music can be, and if you have that power to create, you have the power to change. … The trials and tribulations are always hard, but it comes with the package. You can’t expect anything to be handed to you; it’s harder work than some realize.

So, are these guys gonna make it? Damn straight! There’s not a doubt in my mind. But what exactly is going to give these guys staying power? According to the band, “We have a genuine mutual respect for one another, both personally and professionally. Everybody checks their ego at the door. We don’t scrap over stupid sh*t, and when there is a problem, we talk it over like adults. A lot of bands break up over dumb stuff that could have been avoided if people could set aside their egos and just hear each other out. Not to mention, we’re always having fun. It’s so important to remember why you started playing in the first place, which was to have fun, and that helps to maintain a sense of humility.”

It’s obvious that the guys know what’s important, if they’re going to survive. Yeah, the important stuff. As one of the guys put it, “We hopefully see a prominent future for Undercast. You know … chicks, money and free gear.” And I’m sure they’ll have all that and more, as long as they continue to rock. Good luck guys!

You can check out more about Undercast on their website, www.undercast.org.