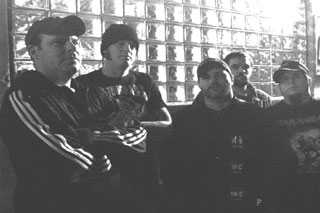 The Red Tops consist of Tony on vocals, Bill on bass and vocals, Dave and Soda Pop on guitars and vocals, and Johnny Walton wraps up the line-up on drums. Together, with occasional drumming from Emery Ceo and Tim Possible, they create a whole new hardcore world of music where you’ve just got to keep listening, because once you start you’re hooked!

I asked them to describe to me what they think their fans enjoy and think about their music. “They are fans because they know what it is about, a fine blend of old school hardcore and metal, just like when we grew up, only we added our own style.” They certainly did add their own style, and it makes the music sound that much more energetic and powerful!

Before we go any further, how about a little background on the band? Every member of The Red Tops has played with other local bands before coming together. It was just member after member after member, but at long last, the true team, who all have the same vision of keeping hardcore alive, met and instantly knew that the timing was right, and the music was hot!

Tony and Billy met years ago, and later joined up with other bands such as Scrapple and The Griswolds. They crossed paths many times over, so the joining of the two was pretty much inevitable. Enter Soda! Leaving Nemesis Enforcer, Soda Pop then joined up with The Griswolds. Now, onto Dave. Dave has actually met Bill and Tony at a bar. He joined after a rival high school guitarist of his left their band, and supplied him with the opening! This set the stage for The Red Tops!

So who’s the genius behind the music? The answer is pretty simple, all of them! One of them comes up with an idea, they all work with it, molding it, giving it some structure, and then come the lyrics. It sounds so simple right? Well, maybe it is … if you’ve got talent like these guys.

So, when you have a band the with the magnitude of these guys, there would have to be both ups and downs right? Wrong! According to the band, there is nothing but an upside, because they all know what it is that they want. The fact is, if there were any downsides, The Red Tops just might cease to exist, and that would definitely be a downside any way you look at it! So if there are no downfalls, there would have to be a top of the mountain, something that the band enjoys the most, and low and behold, it is taking it on the road and playing for each and every one of their fans! I would have to agree, that is a plus not only for them, but even more so for the rest of us.

While we are on the subject, I was curious what some of their fondest memories are thus far. “Having to share the stage with some of our favorite bands,” was the unanimous response. “Every show is worth some sort of memory in one way or another!” Well, what could possibly be a better memory than the shows that have been played, the places that they have gone, people that they’ve met? Only one thing could top all this on tour, and I think all The Red Tops fans would have to agree, it’s buying beer at K-Mart!

Where The Red Tops are headed in the future, only time can tell, but with their positive outlook towards everything they do, and with new fans every day, there can be nothing more than a continuous upside to this hardcore metal revolutionizing band!

The Red Tops currently have shows scheduled for May 5th, May 13th, and May 15th, and you can check out their website for details at www.redtopsmchc.com. If you are interested in purchasing some merch, it can be found at their website as well as www.revhg.com, www.interpunk.com, www.thehardcorestore.com, www.myspace.com/redtops, and www.universalrecords.com.

I would recommend you give these guys a try and see if you’re not instantly hooked as I was! To The Red Tops, I say excellent work boys, keep up the great work, and go out there, make the people scream and cheer, drink that K-Mart beer, and have a blast raising hell keeping hardcore alive year after year!