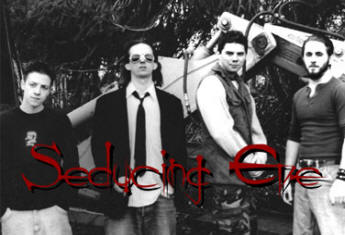 When the Red Hot Chili Peppers first began to form back in the early 80s, record execs wanted to put Anthony Kiedis in front, and have the rest of the band be cast in the shadows. The band did not want to be perceived this way, thereby nixing the entire idea, and since then have made individual personalities as each band member, making up the band – the Red Hot Chili Peppers. Seducing Eve gave me the same first impression. I was given one member’s email, Praz, thinking he would just send me his answers and that would be it. However, his decision to collaborate with the rest of the band proves that Seducing Eve understands what it is to be a band. Working together on the smallest tasks makes the larger ones that much easier.

Philadelphia-based, Seducing Eve has been rocking audiences for a solid five years, and have a loyal fan base that has even gone as far as to beat up hecklers at a bar show. “At [a] battle of the bands, our fans stood up front when they read the results of the battle. When they found out Seducing Eve didn’t win, they booed the winners like proud Philadelphians and chanted our name. It was cool. Some of our hardcore fans are featured on our site.” One of the many signs you know that you’re on the way to making it as a band: crazy fans on your website sporting and supporting you.

Seducing Eve is Jesse Petas on drums, Praz Litaam on guitar and vocals, Craig Zaprala on bass, and Gary Schoch on guitars. They formed after the original drummer invited Praz’s brother, Craig, and Gary to join the band. Jesse was the last addition, and completed the collaboration.

I’m always interested in the creativity behind the music, not to quote VH1. Growing up, you always dream of being a rock star, and coming up with some sick band name that you can imagine hundreds of people chanting during the break before an encore. To learn the reasons behind band names really gives me the sense that Seducing Eve, as one might think, is not named after a girl Eve, but instead is used to represent the entire female population. And well, what guys do for girls… you get the drift. “The band was originally named Corrupted After Seducing Eve or C.A.S.E. After explaining that ridiculous name more times than we could count, Gary said ‘C.A.S.E. is stupid, let’s name the first album Corrupted After and then call the band Seducing Eve.’” They have a little blurb under the Mythology section on their website, SeducingEve.com, explaining this further in detail.

Creativity also extends into the writing of the songs. Whether the whole band sits around a table and discusses what should go into each song, like the mechanics do on MTV’s Pimp My Ride, or if it’s a solo effort. “A lot of the music is a collaborative effort, each member writes their own parts, and some of the music is jammed out. Other times Gary or Praz will bring finished songs to the band and with the combination of efforts the song is worked out into perfection.” I also like to know if songs are actually written about specific people or events in the band members’ lives. It gives the songs a little more meaning to them when the songs’ roots are exposed. I asked if they were. “Most of the songs are about someone or something in particular. Some are about the suicide of Praz’ and Craig’s cousin. Some songs are about ex-girlfriends, one song is about a famous director.” So now when you listen to the tracks on Corrupted After, you will know that the anger some of the lyrics paint can have you head-banging to the beat, while at the same time nodding in agreement and understanding.

And so it was started. Four guys who have never been in a serious band before began working together to create the post-trauma/anger that was created after trying to win girls over *wink*. Or in other words: awesome hardcore, straight-up rock.

AX: What brought the members of the band into music? Why do you all do what you do? Is there anything that you want fans to take from your music?

All of the band members share the same love of music. The band is lucky enough to have generations of musical talent in our roots. Music runs through our veins, many of our parents and grandparents were performers, so it comes naturally. We hope our fans can have a connection with us through our music, and we’re out to save people’s rock and roll souls. Too much of today’s music is fabricated in corporate board rooms rather than from the artists. Today’s youth has lost the spirit of rock and roll and we’re here to claim their souls!

AX: What do you consider the best parts of doing what you do? What are the most difficult or challenging?

AX: What do you feel sets you apart from other area artists?

We try real hard not be a derivative band and forge our own sound. Any time you listen to one of our songs we want you to know you’re listening to Seducing Eve. Our work ethic is also very unique; we practice all the time to make sure our performance is top notch.

AX: What’s your opinion on the lack of an alternative rock radio station in Philadelphia? Any suggestions for fans looking for an alternative outlet?

Look into Satellite Radio; they have tons of alternative rock radio stations or college radio. Most of us stopped listening to the radio a long time ago. Commercial radio only supports something like 32 slots for music a month, and they play the same stuff over and over. Y100 was good to support shows in the area, but didn’t support local music as much as they could have. They only played local bands 10pm Sunday nights.

We want people to know about our website. Unlike most bands, Seducing Eve allows fans to download 15 songs for free from our site. We think that if you like us you’ll support us by purchasing our merchandise. We also allow fans on our mailing list to download exclusive songs. Also fans in the Northeast can request us on college radio, there’s a big list on our site, look for us in your area.
In terms of long term for the band: they have formed their own production company, Corruption Grip Entertainment, and have opened their own studios, Corruption Grip Studios. More information about this is on their website, www.SeducingEve.com. Jesse will even give you a private drum lesson if you would like.

The best place to get all updates plus tons of other great stuff is on their website at SeducingEve.com. They have trucker hats, rock out shirts and CDs, amongst other items, available for purchase. You can also listen to all of the tracks from their album Corrupted After as well as read the lyrics so you can learn them and sing along and rock out harder! When the shows start to be booked, go check these fellas out – they know how to rock hard and if you ever want to treat them after a show, well like I said earlier, they collaborate, so below is what they like – and yes, it’s all different.

Make sure you give a read through on the Request section on their site so you can find your local radio station and give a holla out to the DJ that you want to hear Seducing Eve right now! I’m sure they’ll listen to you, and if they don’t, well then they have no taste in music. Rock on!