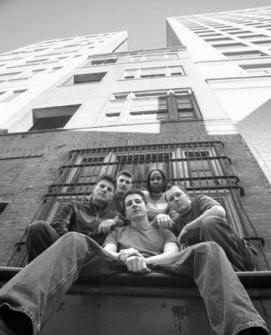 Polymer is Matt Fonda, Dan LaPorta, Ben Weldon, Jon Aldinger, and their latest addition, Candice Harris. Polymer is a rock band from, for the most part, the Bucks/Montgomery County area. Normally, when I conduct an interview with a band for the site, it’s pretty straight-forward. I e-mail some questions, they e-mail responses. Well, this was no different. Except for one little thing. Matt and Ben, the two band members who took the time to answer my questions, just exuded a level of personality in their answers that most bands’ responses are lacking. I was surprised, thrown off a bit at first, but definitely interested. The more I learn about the band, the more I want to know. I hope that you feel the same way.

I find myself nothing short of addicted to Polymer’s music. When I go for a drive, I listen to Polymer. Hell, sometimes I go for a drive just for the sake of listening. I listen to Polymer when I’m happy, when I’m sad, when I’m really pissed off … pretty much all the time. And when I have a long day of work, and I don’t think I can review one more press kit, write one more article, or think about clients for one more second, guess what I do. Yep. Polymer is rock minus all moody bullsh*t. It’ll cheer you up, calm you down … whatever … it’s just good music.

I can’t speak highly enough about this band. Polymer, quite simply, has their sh*t together. They’ve got a good solid sound, great lyrics, interesting personalities … what more can you want? And the completely unique and captivating vocals don’t hurt either. Read their interview below. Learn more about this incredible band. And then go out and check a show before they get too big for their britches and leave us all behind.

AX: How was Polymer started? Can you give the story behind the band? Ben: I’m sorta lazy when it comes to talking these kinds of questions, so I’m just gonna cut and paste from our bio here. (To sum it up: Matt, guitarist, formed the band in 2002. He brought in Jon Aldinger, also a guitarist. They asked Ben to front the group. Dan was asked to sit in with the band on bass for a show, and ended up in the current lineup. Candice, the group’s drummer, was brought in earlier this year. – read the band’s full bio at their website –http://www.polymermusic.com/)

AX: Can you give us some background information on each of the members? Ben: Aww man, another one. Let’s just say that nothing important happened to any of us before we joined polymer: “And on that day, the skies parted and a golden guitar descended from the heavens. The five members of Polymer converged onto that spot, and they saw how good it was. On that day, rock was born.” … You know, or something a little less biblical.

AX: How would you describe Polymer’s music to people? Ben: When people ask me, I just say rock. I try not to get too fancy with genres. One of my goals is to avoid writing two songs that people can say sound similar. We want to just focus on playing strong tunes, whether it’s a faster rock tune, where we can jump around like idiots on stage, or a 6/8 acoustic ballad.

Matt: Yeah, we have yet to be able to capture our “style” into words, and I think that’s a good thing. Music is emotion; it should be experienced, not categorized.

AX: What brought the members of the band into music? Is there anything that you want fans to take from your music? Ben: I know for me, music wasn’t really a choice. Basketball wasn’t really my thing, and those debate team kids were just so damn confrontational. Music just has always been the part of my life I couldn’t get away from even if I tried. I think we’re all like that, and that’s what makes us so passionate about what we do.

AX: Where do you see Polymer going?

Matt: I see us touring as much as possible, playing shows, and oh yeah, touring. As for long term, taking over the world. We’ve started booking a summer tour for the East coast for early June.

Ben: I think we want to see more of this country. PA is great and all, but I long for a grand canyon every once in a while. Long term, I’d like to have a bunch of tours under my belt before middle age kicks that sucker out a few notches.

AX: How does Polymer go about coming up with material? Matt: Ben or I usually write a song and record it first. If everyone likes it, we develop it as a group, each writing our own part if it’s not already amazing. We like to try and get everyone’s input on everything, because it almost always turns out to be a better product in the end. Dan started writing and recording some tracks recently, to which Ben or I will add a melody and lyrics.

Ben: I don’t play any instrument as well as I’d like, but I can fake it enough to get it down on tape and turn it over to these guys to make it into something that sounds like music. The beauty of this band is that everyone brings something to the table writing-wise. Jon is constantly writing guitar and vocal harmonies. He’d harmonize with your vacuum if you gave him half the chance. Dan has about as an eclectic a musical taste as you can imagine. He’s always the guy that can pull us out of a jam if we get stuck on a transition or a part’s just not coming out right. And Candice has more ideas than a AAA guide. Plus she rocks the drumset like you ain’t never seen. The beauty of this band is that we have all at one point or another added that key part to a song that made us say “OK, now it’s done.”

AX: What are some of the best and worst, or most challenging, parts of doing what you do? Ben: As far as the best part, for me, I’d really like to say the songwriting. I think it’s easy to put words into music, but to assemble those two in a way that really gets to people’s emotions is the hard part. As for the most challenging part, I’d also have to say the songwriting. It took a little while, but I think we have a really nice system of checks and balances between the five of us. If an idea is not working, lyrically or musically, we all trust each other and respect each other enough to constructively criticize and find a way to approach the song from a different angle. I know on my end, I will spend days writing a lyric, and will gladly head back to the drawing board if these guys don’t like what I come up with.

Matt: We definitely pride ourselves on our compositions.

AX: What do you feel sets you apart from other area artists? What makes Polymer unique? Ben: Our attitude. We have made a serious effort to write songs with a positive slant to them. It seems like 99% of the rock bands out there these days can write depressing or angry tunes. Personally, I’m sick of hearing about how hard suburban teen life is, and I like that me and Matt generally write about positive things. We definitely feel like it’s our responsibility to keep the audience interested.

Matt: We have a drummer that rocks, and four guys that can all sing, play and jump around for an hour.

AX: Where can fans pick up your music and merch?

Matt: Shows are the best way to get merch for cheap. We have an 8-song cd, which we just released in November, t-shirts, posters and free stickers.

Well, there you go. Get yourself a copy. You won’t regret it.